Attention Black People: Come out come out wherever you are!

I am a people person. I love meeting new people and I place friendships high on my important life pyramid, directly below myself (not selfishly, but in the healthy way) and my family. But I’ve come to the realization that my group of friends is pretty homogeneous. In other words, they are predominantly white. That in and of itself does not bother me. I grew up in an integrated community and learned early on to judge individuals by their character and behavior and not by their color. I’ve had friends of various races and ethnicities. What bothers me is the seemingly few black friends I do have.

I went to college with my best friend who happened to be African American. And she was, (and still is) everything to me, so I didn’t feel a need to collect other friends (until much later when she moved away.) I also had many males friendships in college. But somehow as people joined with their significant others, opposite sex friendships became taboo and tended to dissolve. (In my experience, it seemed to bother the women that their boyfriends/husbands were friends with me.) Also, the college I went to was more of a commuter school. A lot of us came downtown to go to class, then went back to our lives elsewhere, so I think I missed some of the camaraderie that usually accompanies college life. I wanted to join a sorority ever since I saw Spike Lee’s School Daze, but their presence at said college was minimal. And even when I did discover the few there, my parents were not into fronting me the money for pledge fees. Towards the end of college, I started doing internships. It was almost culture shock. That was the first time I really realized I was living in a white world. At each different internship, which later turned into jobs, I was struck with the question over and over again of: Where are they hiding the black people? Just about every job I’ve had, I’ve been either the lone black person, or one of a very few.

Once I started having kids, my social circle prominently featured “parent friends”. Most of these friendships developed as a result of school functions, parent committees and the kids sporting activities. I have been very deliberate in making sure my kids attend integrated schools like I did, because I value that experience. But continually, I find myself asking, where are they hiding the black parents? Now, I don’t believe the black parents are absent from parent committees because they don’t care, or not at the sporting events because my kids play “white sports” i.e. soccer, swim team. I believe that they are absent for the same reason my husband is, they are working really hard, sometimes 2 and 3 jobs to allow their kids to have these experiences. They just can’t necessarily be there.

There is something beautiful about having children that forces you to take a closer look at your life and your decisions. I do not want my kids to look at my friendship circle and see this imbalance as a slight to people who look like them. So I realized I have to take action. Which seems kinda crazy to me. I never thought I’d be in this position. But here it is: I am a black person looking for more black friends. And some of my white friends have expressed a sincere interest in expanding their black friends circle beyond me. 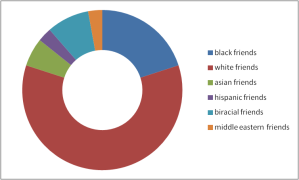 Ironically, I currently live in the 7th most segregated metropolitan city in the country. In my professional life, I educate people on the effects of housing discrimination on our society. Studies show that people benefit more from diverse communities than segregated ones. Because where we live affects who we know, and who we become comfortable with. For many, growing up in a segregated community limits your exposure with dissimilar people. And this goes both ways. If you are black and grow up in a black community, you might be less comfortable around white people because you’re not used to interacting with them. Similarly, if you are white growing up in a white neighborhood, attending a white school, and your only experience with people of color is what you see on TV, then there may be some awkwardness when you encounter them in real life.

All that to say, growing up in an integrated community, I’ve always felt that I could interact with and befriend anyone. So it surprises me to have this particular challenge. (By the way, none of this is meant to discount other races, because I also have those friends, as well as some black friends.) And don’t get me wrong, I have been accused of “acting white” about as often as I’m accused of being “ghetto.” (None of which bothers me. As someone who strives for balance, I consider myself a success!) But what I’m most concerned about is being a great role model to my children. And for them to appreciate all races and cultures including their own, they need to see me not just talk about it, but be about it. So I’m taking suggestions on where to find black people because I’m making a conscious effort to make my friendship circle more diverse. I’m not trying to start a black friends thermometer, (only 14 more black friends to go to reach our goal!) but I do want my kids to see equality in my inner circle.

There is something to being in the club of “the marrieds.”

I fell into the trap. You know the one where society tells young women that they must find a husband and be married by the age of 30, or risk forever being branded an old maid. I mean, once you’re out of college and enter the workforce, if you don’t already have a significant other, it seemingly becomes harder and harder to naturally meet someone. For me, my partner would either come from the bars and clubs, coworkers or mutual friends. Internet dating had not yet hit its stride and was still somewhat of a novelty.

I remember being in such a hurry to get married. We had lived together for 2 years and I felt like, why am I still auditioning? I should already have the part! (Because subconsciously I knew the clock was ticking until my 30th birthday.) And J’s attitude was, what’s the rush? I’m not going anywhere. I’m all in. Why do we need the pomp and circumstance? (That is not the only time I wish I had listened to him.) And it’s not that I would’ve made a different decision about marrying him. But I would’ve taken some time to find out what it meant to me to be a wife and what being a wife meant to him. We had the boyfriend/girlfriend thing down. But being married was more of a challenge. Years 1 & 2 were us trying to navigate the transition from 2 individuals becoming a united entity, and neither of us knew how to do that. So we hit some bumps. Then when we thought we had it figured out (although we didn’t,) we decided to start a family. I was reluctant, despite wanting to be a mother my whole life, only because I took it so seriously. I didn’t give being married much thought because I assumed once you found the person you were supposed to be with, everything would magically fall into place. All you need is love! J convinced me to start our family by saying both of our parents were getting older and he really wanted them to see and know their grandchildren. I couldn’t argue with that. So I threw myself into an intensive 13-month parent training. By the time Xander was born, I felt pretty prepared to be his mother. And its safe to say that the next 9 years of marriage that includes 2 more kids, 2 deceased grandfathers and a dog have been a blur. J’s father passed away 2 weeks before our first son was born and my dad passed 1 week before our second son arrived.

There are so many articles and books about how women can have “it all.” (Ironically, none about how the family can have it all, so much responsibility put on the woman-or that we assume.) Of course I’ve been too busy to read them anyway. I realized I did all my preparation on how to be a parent and barely any training on how to be a wife, let alone a wife raising children. Hence the reason I started this blog. I am on a quest to discover how these roles can best work together: wife, mother, individual.

In this day and age of 72-day marriages, 12 years is a long time. But its really all about perspective. If you’re miserable, then 12 years is forever. If you’re happy, 12 years is but a day. My parents were married 41 years, my husband’s parents 28. You don’t get to 20, 30, 40 years of marriage without some ups & downs. Some marriages are better than others, just as some kids are better behaved than others, some houses are nicer than others or some jobs pay more than others. And no one ever really knows what goes on in a marriage except the 2 people in it. The one thing I know about myself is I’m a long haul type of person. I want to be that couple holding hands and comparing  memories of our 40 years together.

Traditional 12th anniversary materials are silk and linen, representing luxury and comfort. While we definitely are not living in the lap of luxury, there is comfort in knowing someone else is in this life with me. Someone else has chosen me. It is a luxury to share responsibility of parenting. There is comfort in knowing someone has my back. It is a luxury now to be able to say to him “remember how we felt when so and so was born, or when we decided to…” Those shared memories and experiences, that commitment to be here day in, day out, this love that is real and complicated and fun and hard and luxurious and comfortable, this is what marriage means to me.

So, on this day, through:

12 years of Marriage
11 hairstyles
10 cars
9 years of parenting
8 weddings attended
7 funerals of family members
6 job transitions
5 family vacations
4 hospitalizations
3 amazing kids
2 places called Home
1 new dog
and countless “I’m sorrys” and “I love you’s,” I say thank you for asking me to be your wife 12 years ago, for giving me the best 3 gifts of my life, and being my partner in crime. Happy Anniversary Honey!